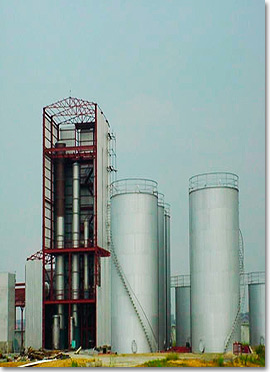 In Tradhol, we consider us experts in alcohol distillation. Thats the reason our bigger efforts target the optimization of our production capacity and the quality in all our distilleries, as well as the development of new projects in strategically regions of the globe.

Tradhol Internacional has promoted and participated in the establishment, development and operation of NOSAK DISTILLERIES, group of distilleries for the rectification of raw alcohols which are located in Lagos, Nigeria, short distance from the port complex of Apapa.

Our company has directed throughout the full design, development, coordination, enlargement and logistics of the plants in Nigeria, and from Spain.

The first Distillery, ALCONI I, designed and built in Spain, begun with a production capacity of about 120,000 litres per day of rectified alcohol of excellent quality (with permanganate times exceeding the 45 minutes and less than 15 ppm of total impurities). The vacuum system is used to achieve the highest level of power savings in the process.

For the construction of this distillery were used first quality materials, with whole sections of rectification in copper which ensures the best final alcohol quality as well as the better organoleptical characteristics.

This distillery started production in July 2002, increasing capacity up to 200,000 liters per day, when operating in 2005 at full capacity, and has been subsequently extended in other two phases with two additional distilleries .

Virtually 100% of the equipment used in these plants (Distillery, boilers, cooling towers, water treatment, etc. systems) are manufactured in Spain.